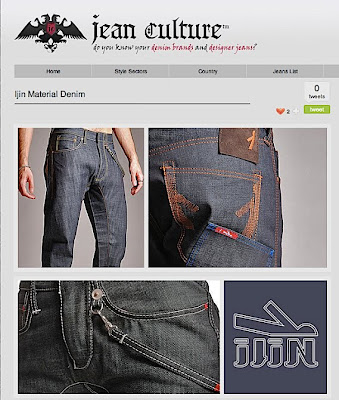 Ijin ''Irregular Indigo Items'' purposely distort the rules of denim know-how,with the clear intention of presenting the classic indigo leg in a contemporary & ingeniously alternative way. Staying ever-faithful to traditional methods of jeans-making but specifically avoiding simply making denim replicas (*check 'My Profile' for explanation), the Ijin product has been sewn by the exact same artisinal production line & craft worked in an Italian workshop, since 2003.The Ijin label is easilly identified by the ''Half-Man'' logo, a reference to the signature method of cutting the denim symmetrically folded & in single cloth pieces. Ijin indigo is highly technical ''stealth-denim'' which appears deceptively historic, especially after ''seasoning'', which is an Ijin term for having worn-in dry denim for at least 9 months before laundering.

''Ijin'' is an archaic Japanese word which was once used to describe someone as an 'outsider' ,'black sheep' or 'alien'.

It can also mean 'hero'.

Where to buy Ijin on the Web